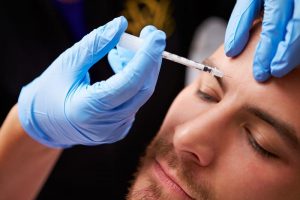 To say that injectable cosmetic treatments are popular is a major understatement. The American Society of Plastic Surgeons revealed that Botox® Cosmetic and other botulinum toxin-based products topped seven million treatments in 2017, almost three times the amount of the next most popular procedure.

Originally developed to treat eye muscle spasms, the cosmetic applications of Botox came later. The botulinum toxin acts as a neuromodulator on the human body, with predictable effects when heavily diluted as it is in Botox’s formulation. Dr. Carl Ferguson and the team at Ferguson Family Medicine are Botox Cosmetic specialists, with the knowledge and expertise needed to offer you effective, natural-looking results.

Wrinkles and lines, the signs of aging on your face, aren’t all caused by a single factor. Many are the result of collagen loss, a substance that moisturizes, supports, and nourishes your skin. Botox has no effect on these passive wrinkles and lines.

Instead, Botox targets muscles that form facial expressions. When you smile or frown, it’s a result of muscle contractions, and sometimes those muscles won’t completely relax again. Worry lines on your forehead and crow’s feet beside your eyes are examples of these “active” wrinkles, caused by contracted muscles.

The success of Botox

Botox works by reducing activity in the muscles that form these lines, in effect chemically relaxing them. You don’t lose the ability to form expressions — your face simply returns to a full resting state. In fact, your face may better reflect your mood. People won’t think you’re always concerned because of your deep brow furrows.

A 10-minute treatment is all it takes to smooth the appearance of forehead lines, frown lines, and crow’s feet. Choosing an experienced medical practice such as Ferguson Family Medical assures that your practitioner has the knowledge of facial anatomy that’s essential for the best Botox treatments.

While you’ll typically see results in 24 to 48 hours, and these results usually last about four months, there may be positive long-term benefits as well as preventive applications.

Effects on the skin

A 2015 study suggests that Botox may restore elasticity to the skin as well as working to relax muscles, at least during the four months that a treatment is active. While the precise effects of Botox on skin elasticity continue to be researched, a new trend in medical aesthetics is emerging.

And the average first-use age for Botox is dropping. Younger people turn to injections to prevent expression line wrinkles from forming in the first place. Since expression muscle contraction isn’t yet an issue, these patients are looking to Botox to “retrain” these muscles before they become contracted. Early sessions with the neuromodulator may reduce the frequency of required treatments down the road for some people.

As part of the most commonly performed medical cosmetic procedure in the United States, Botox has a proven safety record based on thorough research. The team at Ferguson Family Medical is proud to offer Botox Cosmetic to their patients seeking a younger, more relaxed appearance. Find out more about how Botox can help. Call the office at 480-372-4823 today to schedule your consultation.

Dear Patients,
We are open, and we are offering tele-medicine services during the COVID-19 crisis.
Please reach out to us to schedule an appointment!
Thank you.

Call Us Text Us